The Cullinan diamond is the largest non-carbonado and largest gem-quality diamond ever found, at 3106.75 carat rough weight. About 10.5 cm long in its largest dimension, it was found on 26 January 1905, in the Premier No. 2 mine, near Pretoria, South Africa.

Late one afternoon in 1905, Mr. Frederick Wells, the superintendent of the prolific Premier Mine in South Africa, was making a routine inspection trip through the mine when his attention was attracted by something reflecting the last slanting rays of the setting sun. Curious, he stopped for a closer look. He was eighteen feet below the surface of the earth, and the shiny object was on the steep wall of the mine a few feet above him. Mr. Wells quickly scaled the wall and extracted from the blueground what appeared to be a large diamond crystal. At first, he thought he was being fooled by a large piece of glass, but tests proved it to be the largest gem-quality diamond ever discovered. It weighed 3106 carats, or about 1⅓ pounds. It was named after Sir Thomas Cullinan, who opened the mine and was visiting on that eventful day.


The Cullinan was sold to the Transvaal government, which presented it to King Edward VII on his 66th birthday on November 9th, 1907. It was insured for $1,250,000 when it was sent to England. The King entrusted the cutting of the stone to the famous Asscher's Diamond Co. in Amsterdam, which had cut the Excelsior and other large gems. The huge diamond was studied for months. On February 10th, 1908, Mr. Asscher placed the steel cleaver's blade in a previously prepared V-shaped groove and tapped it once with a heavy steel rod. The blade broke, but the diamond remained intact! The second time, it fell apart exactly as planned, and an employee at the factory reported that Mr. Asscher had fainted. A second cleavage in the same direction produced three principal sections; these in turn would produce nine major gems, 96 smaller brilliants, and 9.50 carats of unpolished pieces. The nine larger stones remain either in the British Crown Jewels or in the personal possession of the Royal Family.

These historically celebrated gems and their present mountings are as follows: The Cullinan I, also known as the Star of Africa, weighs 530.20 carats. King Edward placed it in the Sovereign's Royal Sceptre as part of the Crown Jewels, and it is now on display in the tower of London. 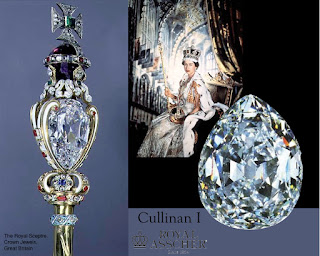 The Cullinan II is the second-largest gem from the Cullinan stone and called Second Star of Africa, weighing 317.40 carat cushion cut stone mounted in the band of the Imperial State Crown. Both gems are in the Crown Jewels of the United Kingdom. 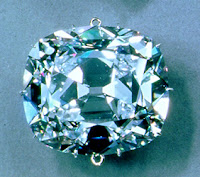 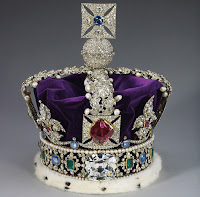 The Cullinan III is a pear-shaped diamond weighing 94.40 carats, and is in the finial of Queen Mary's Crown and can be worn with the IV as a pendant-brooch. Many of Queen Mary's portraits show her wearing these two stones, and Elizabeth II makes use of them the same way.

The Cullinan IV, a 63.60-carat cushion shape, was originally set in the band of Queen Mary's crown, but can also be worn as jewelry, as described above. 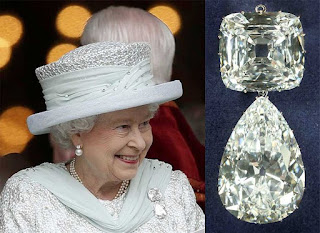